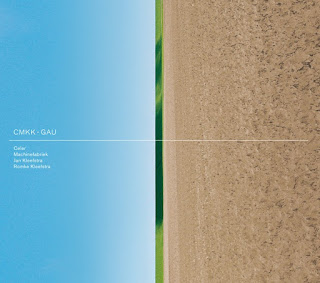 With great pleasure we present a new album! The prologue: in March last year Kleefstra|Bakker|Kleefstra toured The Netherlands and Belgium with Celer and Machinefabriek. When we had one day off the Kleefstra Bros hit the Landscape Studio with Will Long (Celer) and Rutger Zuydervelt (Machinefabriek).

One afternoon of one impro after another lead to about 2,5 hours of new music. This was edited to one long piece of 47.5 minutes.We named the quartet CMKK, which simply stands for Celer, Machinefabriek, Kleefstra and Kleefstra. We named the album GAU, after the small town where it was recorded (and where the Kleefstra Bros record frequently). The darn tasty Monotype Records from Warsaw is releasing the album. Go to the label site for info and ordering. If that aint enough, you can check some of GAU here. We also got GAU available on our very own Bandcamp.

GAU is part of an impressive list of eight albums Monotype releases on September 16th. Besides the album by CMKK there is KK Null + The Noiser, Charles-Eric Charrier, Jean-Luc Guionnet/Eric Cordier, Akiyama/Carter/Kiefer, Strike, Looper and last but certainly not least Wooley/Yeh/Chen/Carter. Okrzyki!
Posted by romke kleefstra at 10:40 PM