The [r] blog already informed you a bit about The Alvaret Ensemble. There is a little more to tell. First of all the band is playing the Freeze Festival in the city of Leeuwarden on September 22nd. Then the release for the debut album is now set for December and The Alvaret Ensemble is very pleased to announce that the album will be released by Denovali Records. More about that soon. One last thing, you can already find The Alvaret Ensemble on Facebook. No kidding. Like?
Posted by romke kleefstra at 11:50 AM 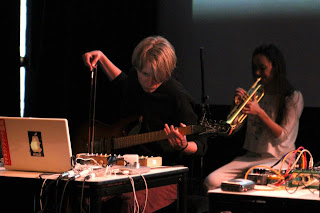 Two months ago the Irish label Northern Twilights published a cassette by Kleefstra|Bakker|Kleefstra, containing two live gigs. One of these gigs is now streamed online on Soundcloud. It's the one recorded in the town of Drachten, featuring Sytse Jansma (vocals) and Sanne van Hek (trumpet, also on the picture above with Anne Chris Bakker). Speaking of Kleefstra|Bakker|Kleefstra, Anne Chris Bakker just released his first solo album. Great stuff which you can read more about over at Somehow Records.

Kleefstra Bakker Kleefstra Live 2012 by NorthernTwilightsWooks
Posted by romke kleefstra at 6:39 AM