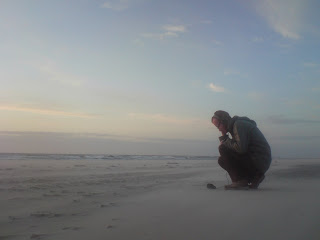 So, Piiptsjilling spend a week on the finest Dutch Wadden Sea island Vlieland, with Greg Haines and the video-collective 33one3rd. For the artist in residence project Seeljocht.

Sadfully Peter Broderick couldn't come because of illness (he's better now and coming to the festival in September). Still, it was a very good week. With Martyn Heyne as our sound engineer we recorded nine pieces. One of these will be used for the Into The Great Wide Open festival in September. All the other music will probably be used for future releases (insert smiley here!).

The 33one3rd video guys did some incredible filming with beaming pictures and video on the dunes in the middle of the night and filming that. Watch one of the teasers they made for the Seeljocht-blog. Greg Haines made one of the weirdest popsongs ever, featuring Piiptsjilling's Mariska Baars (vocals) and our friend Sytze Pruiksma (drums). Meanwhile Heather Broderick and Nils Frahm are recording on location during their stay in the USA. It's all so good!

For the Dutch there's already quite some stuff to read and watch on the Seeljocht-blog, like how everyone is finding its place, something about the importance of the isle for birds, what happened during the residency week and the poem of Piiptsjilling's Seeljocht-piece. For those who don't understand Dutch, Esc.Rec. wrote a nice little review on the project.

[r] keeps you posted on Seeljocht.

[on the picture Piiptsjilling's Rutger is making some field recordings... beach recordings]
Posted by romke kleefstra at 2:56 PM


Piiptsjilling is artist in residence for the Into The Great Wide Open Festival on the Dutch Wadden Sea island Vlieland. The festival takes place in the first weekend of September and is already sold out. Piiptsjilling is staying on the island from June 19th until June 26th to make and record new music, influenced by the island and the Wadden Sea. The groop is bringing Heather Woods Broderick, Peter Broderick, Nils Frahm and Greg Haines. The project is called 'Seeljocht' (light of the sea). There will be videos made to the music and all this will be presented live at the festival and on a cd, which is available at the festival. Besides all this 'Piiptsjilling and friends' will probably do a kind of live residency at the festival too. You can keep up with the Seeljocht project on the special project site.
Posted by romke kleefstra at 2:25 AM

Broadcasted by Concertzender on June 2nd, from now on also on Soundcloud! Davis|Kleefstra|Kleefstra live at Havenkwartier, Deventer, March 18th (2011).

SPLIT COLLECTION OF POETRY BY JAN KLEEFSTRA AND FLORIS BROWN

A new collection of poems by Jan Kleefstra has been released together with the South African poet Floris Brown in a double booklet. The poems of Jan Kleefstra are written in the Dutch language. The poems of Floris Brown are written in the original Afrikaans language. The split collection of poems brings two poets together who live thousands of miles away from each other.

For those who are interested, the collection of poems can be bought at Jan Kleefstra (e-mail). The book is published by Friese Pers Boekerij.
Posted by romke kleefstra at 4:37 AM