THE ALVARET ENSEMBLE LIVE IN THE NETHERLANDS

From March 1st until the 4th The Alvaret Ensemble will be touring The Netherlands as part of the Cross Linx Festival. Starting off in Eindhoven, Cross Linx will take The Alvaret Ensemble down Amsterdam, Rotterdam and Groningen.The Alvaret Ensemble is part of Music Mining, which is like a small festival within the festival, except for Paradiso Amsterdam, where the band is opening the (already sold out) evening. Check for all details the Cross Linx website. And the band is playing as a five piece this time, including Hilary Jeffery (Kilimanjaro Darkjazz Ensemble, The Mount Fuji Doomjazz Corporation, Lysn) on trombone 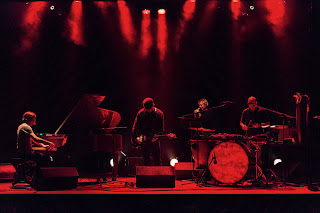 On February 17th Romke Kleefstra and Sytze Pruiksma will do a special performance with Soli Brass, the best brass band in the north of The Netherlands. The first jams together were actually pretty awesome. The audience will be locked in between and surrounded by the twenty piece brass band and the stage with Romke and Sytze on it. A natural surround sound, of what you could call an impro-orchestra!
This special gig is in the context of Klanklânskippen, which takes place in the theatre De Lawei in the town of Drachten four times a year. So, the 17th, three o'clock in the afternoon and more info here. Previous editions featured friends like Celer, Nils Frahm, Machinefabriek, Greg Haines, Gareth Davis, Danny Saul and many others. In April there will be another edition of Klanklânskippen on which Kleefstra|Bakker|Kleefstra will hook up with Pieter Nooten (ex-Clan Of Xymox).
Posted by romke kleefstra at 1:32 AM