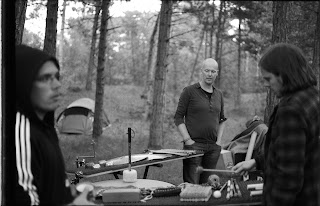 Let's introduce The Alvaret Ensemble! Last year Kleefstra|Pruiksma|Kleefstra and Greg Haines shared stages frequently. Collaborating on festivals such as CTM (Berlin), Approximation (Düsseldorf), Into The Great Wide Open (Vlieland, NL) and Le Guess Who (Utrecht, NL) was working out so well that the four decided to hook up more often. The quartet got together and recorded for three nights in a row in the Grunewald church in Berlin with several musician friends and decided to form The Alvaret Ensemble. The debut album is scheduled for late November, featuring Iden Reinhart (Strië), Hilary Jeffery, Peter Broderick, Nils Frahm and Martyn Heyne. More about that soon-ish.

The Alvaret Ensemble is also involved in a kind of artist in residence project in the slipstream of last year's Seeljocht. We are moving temporary to Iceland and will make music there with some wonderful Icelandic musicians such as Kira Kira, Eirikur Orri Ólafsson, Ingi Gardar Erlendsson and Borgar Magnason. We aim for a release of these recordings off course and will perform several nights in a row on the Dutch festival Oerol on the Frisian island Terschelling. Also our video brothers of 33one3rd are part of the gang. There's more to the project, but first... hey ho Iceland. Heilsa!

picture by martyn heyne
Posted by romke kleefstra at 11:48 AM

When we played Tokyo in November 2010, we made some live music to a short film by Shinkan Tamaki at the Uplink Factory. A few months later we recorded that impro as a soundtrack to the film. Listening back to the track, titled 'Nacht en Dei', we decided to put it public as a download on Soundcloud. 'Nacht en Dei' is probably the most minimal track we made so far. The sound of Kleefstra|Bakker|Kleefstra stripped down to the bone. Dark, mysterious, slow, barefoot, just like the film. Some serious headphone music. Enjoy!

Posted by romke kleefstra at 12:29 PM 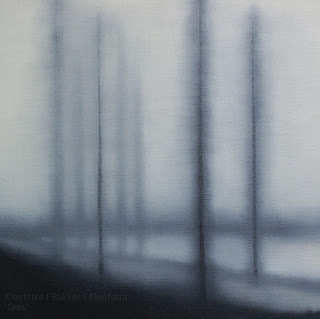 Three years ago already Kleefstra|Bakker|Kleefstra (KBK) released it's first album Wink on Apollolaan Recordings. After that the trio played live frequently in Europe and Japan. For the Japan tour a special tour cd was released by White Box, containing a dark and harsh piece by KBK. A radio session together with Peter Broderick and Machinefabriek lead to a fine Mort Aux Vaches release last year. Last but not least music of KBK was used in the short, experimental film 'Nacht en Dei' by Shinkan Tamaki (Jap) and the short movie 'Bohai Bay' by Sytze Pruiksma and Elmar Kuiper (NL).

But now it's time for a new full length. It is called 'Griis', which is Frisian for grey, but also for something completely awful, dreadful and terrible. Griis is a slow moving, softly flowing, dark triptych. An ominous soundscape, created by bowed, finger picked, feedbacking, layered and squeaking guitars. It was recorded live in the Landscape Studio in the spring of 2010 and it was mixed and mastered by Martyn Heyne in Berlin last autumn. Griis is released as a 12" LP by Low Point, although you can also get yourself a digital download. Get it through Low Point or all these distributors in the USA, Europe and Asia. Or get it through the [r] blog. Check the releases page.

Check the tourdates for KBK, Celer and Machinefabriek here!
Posted by romke kleefstra at 1:39 PM 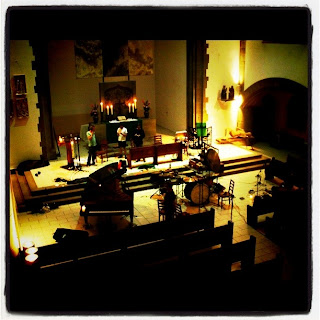 Kleefstra|Pruiksma|Kleefstra (KPK) will be playing the Willibrordus Chrurch in the small town of Holwerd, on the Wadden Sea coast, during the Atelierroute Lauwersland, on Sunday the 11th of March (16:00 h). A special gig, because the trio has some announcements to make.

First of all KPK presents Deislieper, because since the release of the cd the trio never played its homeland. But there's more. KPK will form a new ensemble with a great piano player. This new ensemble will leave for Iceland, to be joined by some Icelandic musicians, and to make and record new music for a special festival in The Netherlands. This will all be filmed and it will be performed live on the fest at a later date.

The new ensemble also made some exciting recordings last summer at the Grunewald Church in Berlin, with several friends. The first album with a part of these recordings will be released in fall. But before this is all going to happen, KPK will first release an album (as a quartet) in spring, that was recorded the day after Deislieper was recorded. More about it soon and on March 11th, when KPK is presenting all this and more. Come round, you're welcome!
Posted by romke kleefstra at 12:33 PM