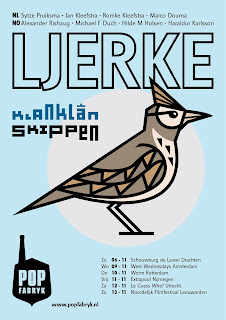 LJERKE is a Dutch-Norwegian artist in residence project, featuring the Kleefstra Bros and Sytze Pruiksma from the Netherlands and Alexander Rishaug, Hilde Marie Holsen and Michael Duch from Norway. They'll be touring in the Netherland from 6-13 November, together with the video artists Marco Douma and Haraldur Karlsson. A new project of live impro music, poetry and film, kinda in the same context of former projects as Seeljocht and Skeylja that also featured the Kleefstra's and Pruiksma. LJERKE can be seen on several locations and each night it will be different. The LJERKE-group will also hit the studio for recordings.
Posted by romke kleefstra at 5:13 AM