Skeylja is the name of an artist in residence project The Alvaret Ensemble is involved in. From March 27th until April 2nd the ensemble (Greg Haines, Sytze Pruiksma and The Kleefstra Bros) stayed in Iceland, travelled around and made quite some instant music with the wonderful Icelandic musician friends Kira Kira, Eirikur Orri Ólafsson, Ingi Gardar Erlendsson and Borgar Magnason. Meanwhile the video collective 33one3rd documented the trip and made a lot of great footage.

From June 16th until June 23rd Skeylja will be performed on the Oerol festival on the Dutch Wadden Sea island Terschelling. Eight nights in a row we will play in the old church of the village of Hoorn and every show will be different as for every night another one of the musicians is curator. A musical and audiovisual experience, based on our time in Iceland. More news on the project website and here you can watch a teaser.
Posted by romke kleefstra at 9:07 AM 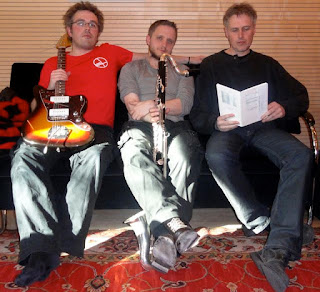 In March 2011 Davis|Kleefstra|Kleefstra did a small tour through the Netherlands, accompanied by Bela Emerson. It also included a session for the VPRO radioprogram Dwars. This live recorded impro by the trio is now online. Check it out here.
Posted by romke kleefstra at 12:19 PM 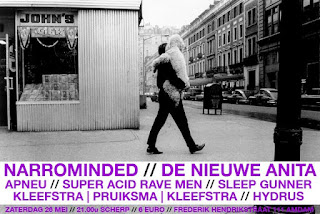 May 26th Kleefstra|Pruiksma|Kleefstra plays De Nieuwe Anita in Amsterdam on a Narrominded label night. Narrominded is a very fine Dutch record label. The label night starts at 21h sharp! Hope to see you there.
Posted by romke kleefstra at 6:10 AM

Email ThisBlogThis!Share to TwitterShare to FacebookShare to Pinterest
Labels: kleefstra|pruiksma|kleefstra 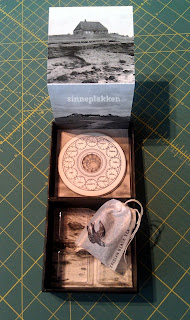 The set of six, very limited releases in the 'chocolate box' series by Time Released Sound is now up for pre-order. This series includes Sinneplakken, a release by Kleefstra|Pruiksma|Kuitwaard|Kleefstra. In advance the series is available as a complete set only and at a reduced price compared to what they will be sold for individually, or as a set later. At Time Released Sound some pictures and sound samples of the first five boxes are up, so check it out.

Sinneplakken is set for release on June 15th. The album consists of two 3" cd's in an awesome package (see picture). The five tracks on Sinneplakken were recorded the day after Kleefstra|Pruiksma|Kleefstra's 'Deislieper-session'. Guitarist Christiaan Kuitwaard was invited to join the three and this lead to a productive afternoon of some cool improvisation. More on Sinneplakken later. First get that pre-order while you can!
Posted by romke kleefstra at 6:16 AM